How I made a clown suit 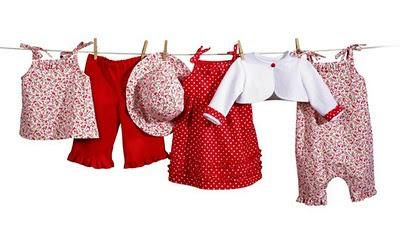 At Joanne's, they were having a sale on patterns and - joy of joys- the pattern I was interested in was not sold out. This was a first! Hurray! I
snatched up the last copy and headed home, eager to play with my new toys.

Several months before, I had purchased some cute pink fabric with elephants on it. I bought it without a particular project in mind. It was just too cute to pass up and I found a couple of coordinating prints as well. I waited in line with a crying baby, had my fabric cut and fought off a couple of other women who wanted the last of one bolt I was trying to purchase. I didn't know what I was going to make, but it was going to be fabulous!

Now, I had the fabric and the pattern. After the little person was asleep, I busily went to work cutting out my pattern. Excitedly, I read all of the directions and carefully planned out my finished masterpiece. I think that phase lasted about three days, but I finally started actually cutting real fabric and I was ecstatic to make something else that my little girl could wear.

Three days after, I was finally able to piece the thing together and that's where it all started going wrong. It shouldn't have been hard for me to follow directions, but my mother can attest that it's an issue I've had all of my life, and it will probably continue to plague me well into my toothless old age. To begin with, I assembled my project wrong sides together (don't ask me how). By the time I was done fixing all of the misassembled pieces, I needed a new seam ripper; I'd dulled my old one.

As the small project began taking shape, I began wondering about my fabric choice. Green and brown elephants and polka dots looked better on the bolt than as attire. My finished piece was just one giant blob of clown costume. I hoped that throwing a belt around it would help break up the fabric so I started on the pattern altering.

After I added the belt, I decided that the whole thing was just too wide through the middle, so I put some elastic inside the "sash". That was another day shot in this once imagined "quick" project. It was looking better, but by no means was it as I envisioned. Now, there was a big wide strip of brown fabric in the middleand it just didn't look finished so I added a ruffle on the front. After the first ruffle, it needed more work because the legs were too long and too loose. It needed elastic along the leg holes as well or there would be no hope of it ever staying on. 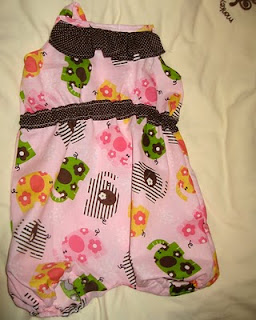 My finished project is, undoubtedly, a clown suit. She's a cute little clown, but a clown nonetheless. Perhaps, the project would have been bett
er suited to the white with tiny dots fabric suggested by the photos of the pattern? Next time, I hope to do better with my fabric choice. Luckily, she can make any disaster cute. 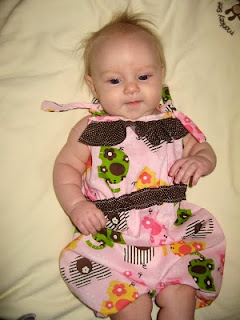 Well, she's really not too sure about it yet. At least it's comfortable, right? 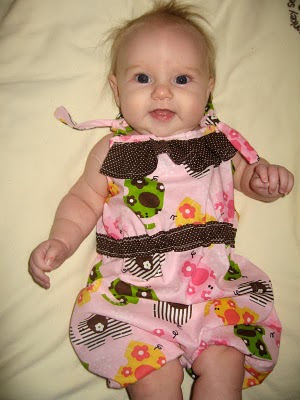 Well, there, I guess she doesn't think it's so bad after all.